Mise en Snap: A Woman is a Woman 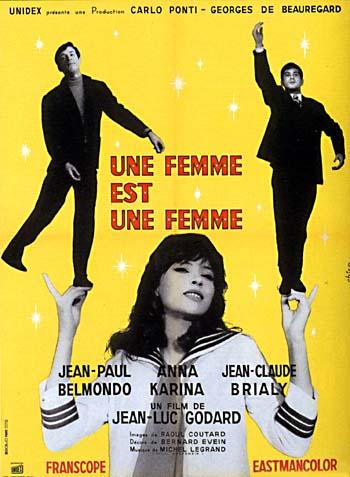 A Woman is a Woman (Une Femme est une Femme’) is a 1961 French new wave film directed by Jean-Luc Godard. It’s colorful, quirky and adorable in it’s imagery and story. I found the interior shots to be clean, bright and simple, yet quaint and kitshy-cool. Reminds me of the delicious interior eye-candy to be gorged on in each of the Jeu de Paumes books.

The film centers around the relationship of an adorable exotic dancer Angéla (Anna Karina) and her live-in boyfriend, Émile (Jean-Claude Brialy). This films requires little-to-no serious thought, all of the discussions are completely trivialized and cute to watch. For instance they use book titles to argue and debate issues, pointing to titles that communicate the response that they would like to give.

Angéla wants to have a child while Émile does not, all the while Émile’s best friend Alfred (Jean-Paul Belmondo), constantly insists that he is in love with Angéla. It must be that every woman’s biological urge to have (bear, adopt, get a cat or chihuahua instead of) children kicks in at some point in their lives (even if just by passing thought!) no matter how much fun they may be having. *wink*